This guide is an introduction to the day-to-day use of dep. If you haven't set up a Go project at all yet, though, run through Creating a New Project first.

Dep is a tool you'll use regularly in the course of normal Go development. Regularly, but briefly - dependency management is never the place we want to be spending our time or energy! In keeping with Go's philosophy of minimizing knobs, dep has a sparse interface; there are only two commands you're likely to run regularly:

This guide primarily centers on dep ensure, as that's the command you run to effect changes on your project. The Models and Mechanisms reference document details how the things work under the hood, and is worth reading if you're encountering a confusing dep ensure behavior (or just curious!).

Dep's main command is dep ensure. The verb is "ensure" to imply that the action is not just some single, discrete action (like adding a dependency), but enforcing some kind of broader guarantee. If we wanted to express the dep ensure guarantee as a sentence, it would go something like this:

"Hey dep, please make sure that my project is in sync: that Gopkg.lock satisfies all the imports in my project, and all the rules in Gopkg.toml, and that vendor/ contains exactly what Gopkg.lock says it should."

As the narrative indicates, dep ensure is a holistic operation. Rather than offering a series of commands to run in succession that incrementally achieve some final state, each run of dep ensure delivers a safe, complete, and reproducible set of dependencies with respect to the current state of your project. You might imagine repeated runs of dep ensure as being a bit like a frog, hopping from one lily pad to the next.

There are four times when you'll run dep ensure:

If you're not sure if there have been changes to imports or Gopkg.toml rules, run dep check. It will tell you what is out of sync in your project. If anything is out of sync, running dep ensure will bring it back into line.

Let's explore each of these moments. To play along, you'll need to cd into a project that's already been set up by dep init. If you haven't done that yet, check out the guides for new projects and migrations.

Let's say that we want to introduce a new dependency on github.com/pkg/errors. This can be accomplished with one command:

Much like git, dep status and dep ensure can also be run from any subdirectory of your project root (which is determined by the presence of a Gopkg.toml file).

This should succeed, resulting in an updated Gopkg.lock and vendor/ directory, as well as injecting a best-guess version constraint for github.com/pkg/errors into our Gopkg.toml. But, it will also report a warning:

As the warning suggests, you should introduce an import "github.com/pkg/errors" in your code, the sooner the better. If you don't, a later dep ensure run will interpret your newly-added dependency as unused, and automatically remove it from Gopkg.lock and vendor/. This also means that if you want to add multiple dependencies at once, you'll need to do it in a single command, rather than one after the other:

Dep works this way because it considers the import statements it discovers through static analysis of your project's code to be the canonical indicator of what dependencies must be present. That choice does add some pain at this moment, but it reduces friction and automates cleanup elsewhere. Tradeoffs!

Of course, given this model, you don't have to use dep ensure -add to add new dependencies - you can also just add an appropriate import statement in your code, then run dep ensure. However, this approach doesn't always play nicely with goimports, and also won't append a [[constraint]] into Gopkg.toml. Still, it can be useful at times, often for rapid iteration and off-the-cuff experimenting.

The ensure mechanics section on -add has a more thorough exploration, including some ways that dep ensure -add's behavior subtly varies depending on the state of your project.

Ideally, updating a dependency project to a newer version is a single command:

This also works without arguments to try to update all dependencies (though it's generally not recommended):

Only if one of the following has occurred will a dep ensure be necessary to bring the project back in sync:

In short, dep is concerned with the set of unique import paths across your entire project, and only cares when you make a change that adds or removes an import path from that set. dep check will quickly report any such issues, which will be resolved by running dep ensure.

Gopkg.toml files contain five basic types of rules. The Gopkg.toml docs explain them in detail, but here's an overview:

Changes to any one of these rules will likely necessitate changes in Gopkg.lock and vendor/; a single successful dep ensure run will incorporate all such changes at once, bringing your project back in sync.

Generate a visual representation of the dependency tree by piping the output of dep status -dot to graphviz. 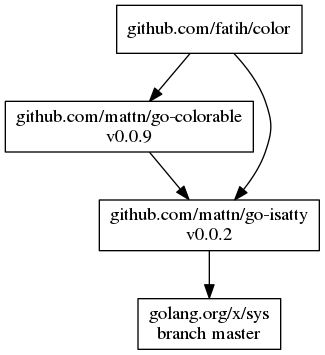 Here are the key takeaways from this guide:

Also, a couple other miscellaneous tidbits: